Deep in the foothills of Mount Sozrin there exists an outpost of reclusive monks committed to contemplation of The Sisters. The Halls of Valencia is its name, for Valencia the Lady of Repose, patron saint of philosophy, scholars, and thoughtful contemplation, is their patron and the particular object of their devotion.

THE HISTORY THEY KNOW: The Halls have a long history, with origins lost in the murky dearth of records from the century around the end of the Age of Saints. The stories tell that the Halls once belonged to Valencia herself, but even the monks make such claims with the smiling eyes of one who wants to believe a nice tale. Over the ages it has been sacked twice, survived a dozen fires, been built onto and rebuilt and renovated, and swapped hands more times than any can count. Three generations ago they came into the possession of Lord Tarrow, a renowned scholar and devout of Valencia who converted them to their current use as a monastery producing cider and silk and scribing services in exchange for goods that supplement their subsistence needs. The monks’ contact with the world outside their halls has always been scant, but of late it has dried up altogether, including the outflow of goods to the nearby town of Kottenham, and
parties attempting to make contact have gone missing.

The treasure-hunters believe The Halls of Valencia have fallen to some fell force and that thus their valuable goods are free to any who can take them, or else that it is under siege by the same forces and lifting the siege will grant them a reward. To support this theory, the mayor of Kottenham has offered a reward for news from the monks.

The Halls of Valencia is an Incursion for Trophy Gold by Jesse Ross, with the fantastic layout and illustrations by Jake Householder who can be found at @jakehouseholder on twitter or at jake.householder@gmail.com.

The Incursion has 5 sets covering the theme of complacency and neglect as the treasure-hunters explore a secluded outpost of monks that has come under the thrall of a malevolent spirit.

The printer-friendly plain text and the initially released layout version (which contains some minor layout issues, and does NOT contain the illustrations) are available as PWYW. The fixed layout with art version is available from $5.

In order to download this incursion you must purchase it at or above the minimum price of $3 USD. You will get access to the following files:

Support this incursion at or above a special price point to receive something exclusive.

Feel free to use these! 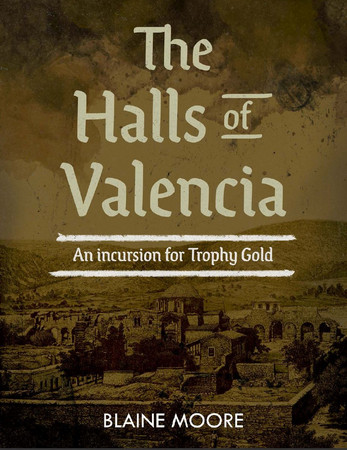 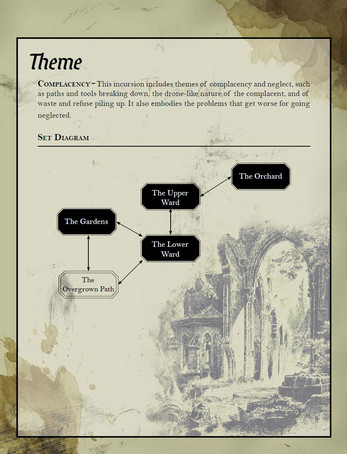